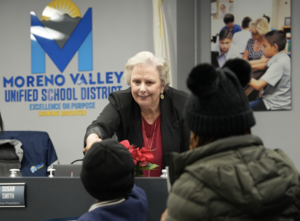 MORENO VALLEY, Calif. – At its annual reorganization meeting, Tuesday, Dec. 13, three board members were sworn in followed by the unanimous appointments of Susan Smith as the president of the school board, Brandy Clark as vice president, and Ruth Self-Williams as clerk.

The new officer positions were effective immediately and they will serve in their new roles for the next 12 months. Smith thanked Cleveland Johnson for serving as the board president for the past year.

“I would like to thank my fellow board members who elected me [as] president for the upcoming year,” said newly elected president Susan Smith. “The duty of the board of education is to provide direction to the district.. The focus during this year will be on overcoming the effects of the pandemic and increasing student achievement.”

“Susan Smith is a passionate school board member who will lead our district with pride,” said Superintendent Dr. Kedziora. “We look forward to continuing working together to fulfill our vision and mission, with students at the center of everything we do.”

After the new officers were elected, outgoing president Cleveland Johnson, outgoing vice president Susan Smith, and outgoing clerk Brandy Clark were presented with commemorative gavels and plaque as a thank you for their service.